Life and Fires and Stuff

I know I’ve been MIA for awhile… got caught up in all the election stuff, (GO OBAMA!!), and went through post election blues… burnt out yet still wishing Rachel Maddow had more to report. 😛

Missed a bunch of swells and feel bummed about that…

Now this week I’m surrounded by the brush fires in Los Angeles and haven’t been able to go out for days due to the smoke and ash. Believe me, I’m grateful my house isn’t in danger but it’s amazing how so many of us are affected even though we live miles away from the actual flames.

This photo was taken at the beach 2 blocks from my house in Long Beach… ash was falling like a light dusting of snow and smoke burned my eyes… the fires in Corona and Yorba Linda were about 20 miles away but the winds brought the smoke overhead, blocking out the sun and making Noon look like evening. 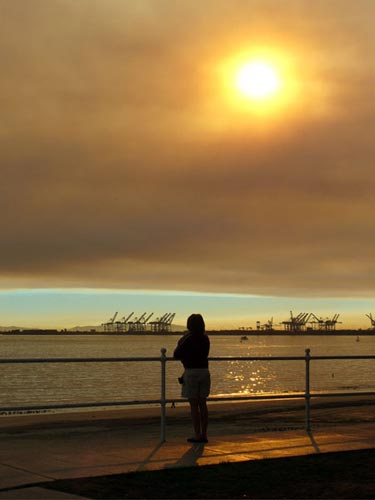 With today being a holiday I’m moving slow this morning… just drinking some coffee and cruising a few of my favorite sites. Found a couple things I thought I’d share…

One of my favs, Beach Trading, is having a sale that unfortunately ends today, (sorry I didn’t catch it earlier this week). It’s on one of the Indo Boards that they carry: the Indo Board Pro. If you get one by midnight tonight they’ve got a coupon at their blog where you can get a discount.

These balance boards are great for getting in shape and are perfect for working on your balance and staying in shape when you’re away from the water or enduring a long flat spell with no surf.

Another one of my favs, Buy Rash Guards, has got a great blog post about grilling on the Fourth of July with some delicious bbq recipes. I think I may try the chicken one tonight – m-m-m-m-m-m.  😛

Well, thanks to the folks over at the Blue Ocean Institute I don’t have to!!

Believe it or not the Blue Ocean Institute has launched the FishPhone, which brings sustainable seafood information straight to your cell phone or PDA. So the next time you’re about to pick out a piece of fish at the market or order from the menu at a restaurant just text 30644 with the message “Fish” and the name of the fish in question and within seconds you’ll get an environmental assessment of your choice of seafood.

Yesterday I’m in my car and turn on the radio as I hear the tail end of a news report where the reporter is interviewing passengers stranded at the ATA ticket counter at LAX because they came to board their flights to Hawaii and the ATA ticket counter was closed with nobody around and only a handwritten note apologizing that they had filed bankruptcy and closed that very morning!

First I was in disbelief that 2 airlines would go belly up in the same week with NO warning to their passengers, (is that legal?), then panic started to set in as I tried to remember which airline I booked my May trip to Hawaii with 2 months ago… I raced home only to find that , yes, it was friggin’ ATA!

Of course I had no email or warning from them and when I logged into my Travelocity account all appeared fine… thank goodness my girlfriend, (who used to work in travel), got on the phone immediately and got me a flight reservation for the same dates and times on another airline… of course the cost was $175 more than I had paid for my ATA tickets but at least my trip was still on, (by 9pm the SAME flight she booked me was almost $400 more than what I had first paid – VULTURES!!)

I’m keeping my fingers crossed that Travelocity sticks to their promise to issue a refund for the ATA tickets… at least I wasn’t one of those poor people who walked up with bags in hand, ready to start my Hawaiian vacation, (one couple was on their way to get married!!), only to find a closed ticket counter!!